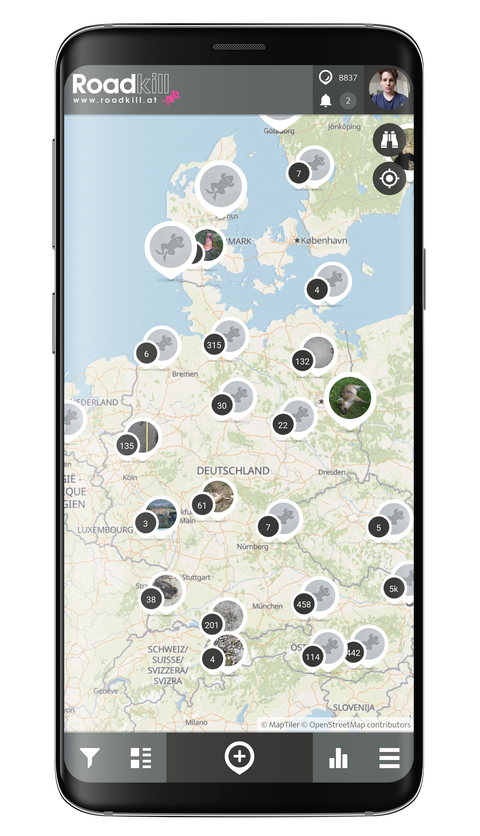 In the Roadkill Citizen Science Project from the University of Natural Ressources and Life Sciences in Vienna, Citizen Scientists and researchers collect data about roadkill on streets all around the world. If there`s a high number of roadkill in one spot or a particular species gets killed in the same place a lot, that can help scientists understand how the animals came to die and find solutions for it.

The Citizen Science project Roadkill of the BOKU (University of Natural Resources and Applied Life Sciences, Vienna) collects data about which animals are killed on the streets worldwide and why. This data then identifies hotspots in order to defuse those them.

How does roadkill happen?

Roads cut through natural habitats of many species. This phenomenon is referred to as habitat fragmentation, and describes the emergence of discontinuities (fragmentation) in an organism's preferred environment (habitat), causing population fragmentation and ecosystem decay.
On their search for food or mating partners (e.g. deer that travel long distances in the autumn in search of mating partners) or when switching between winter and summer quarters (e.g. toad migration in spring), animals often have to cross roads. These are especially affected by roadkill.

But roadkill is also relevant for us humans: "Animals on the road are a great danger and also a great ethical burden for motorists. Not only collisions with large wild animals such as deer, wild boar, etc. cause personal and property damage every year. Small animals such as hedgehogs and toads can also cause damage as accidents happen again and again due to change and braking maneuvers. " - the initiators told us.

The project's goal is to reduce roadkill as much as possible by finding the factors that determine it.

First and foremost, it is crucial to get an overview of the number and distribution of roadkills. The use of citizen science makes it possible to study large areas and to determine when (weather, season, etc.), where (forest, urban area, field, etc.) and on which type of road which species is killed.

Then roadkill hotspots can be identified and mitigated in cooperation with local authorities and NGOs.

These surveys will enable car drivers to warn of road-km hotspots (road sections with a high density of roadkills per year), depending on location and season, by implementing the data in navigation devices.

In addition, the Roadkill project raises awareness among participants about habitat fragmentation and provides public knowledge on where roadkills are taking place.