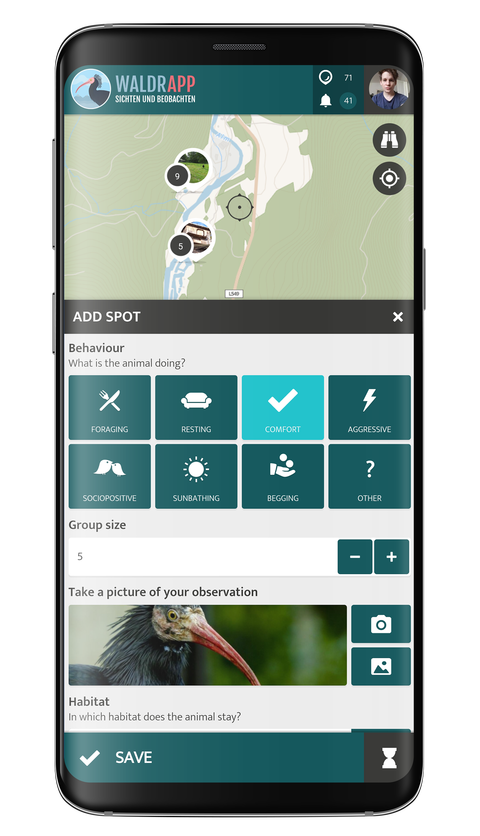 WaldrApp is a Citizen Science project from the University of Vienna aiming to collect ecologic Information on the whereabouts of "Waldrapps" (English: northern bald ibis). Since these birds are an endangered species, the data collected through the app can help gain essential data for future settling projects. Feel free to join and contribute to this citizen observatory!

The Northern Bald Ibis (Geronticus eremita, NBI) is worldwide one of the most threatened bird species. A free-ranging colony was established in 1997 at the Core facility Konrad Lorenz Forschungsstelle (KLF) for Behaviour and Cognition of the University of Vienna in Grünau im Almtal (Upper Austria). This colony provided valuable information for reintroduction projects in Europe.

The project WaldrApp focuses on the ecological aspects of the areas used by the birds. Preliminary results show that NBI select their foraging grounds according to different ecological parameters: sites with a high distance to roads, houses and trees as well as short vegetation are clearly preferred.

Habitat selection depends mainly on the current resource availability. In addition, social animals are particularly prone to show site fidelity and to form traditions. The birds spend the winter and the breeding season in the Almtal valley, while they can be found in about 30 km air-line distance from the KLF over the summer (Kremstal, this habit has been established since 2008).

Later on, the acquired information and the app itself could be adapted worldwide for other NBI populations and reintroduction projects.