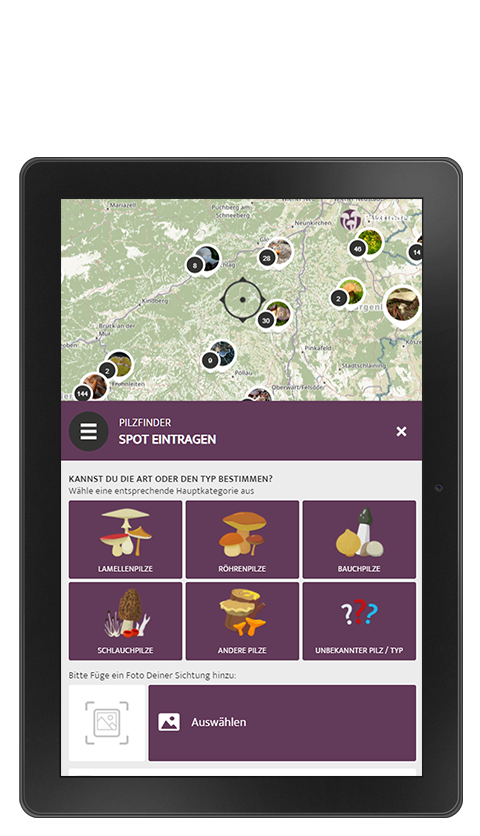 Pilzfinder is the Web App of the mycology research society of the University of Vienna. In the browser-based project, participants can contribute mushroom observations from all across Europe and get feedback from the expert of the Austrian Mycology Society. By joining this Citizen Science project, users help with the science behind fungi and learn more about the fascinating world of mushrooms.

The Pilzfinder (mushroom finder) is a Citizen Science Web App created in cooperation with the Mycology Research Society of the University of Vienna. The idea behind it on the one hand is to preserve and expand the very old knowledge about wild-growing mushrooms and toadstools and, above all, to introduce the topic to and engage the younger generation. On the other hand, finding out about fungus occurrence and how the species change over time due to global warming, was equally important to the researchers.

Many species of fungi have developed strategies to respond to climate change and adapt accordingly. Nevertheless, many Arctic-alpine mushroom species are endangered. Data from different countries in Europe show that the fruiting bodies of mushrooms over the course of the year, unlike in previous decades, are now found both over a longer period of time and later in the year. In order to be able to record and evaluate these observations scientifically better, the Mycological Society relies on the help of the population: Citizen scientists can use the SPOTTERON Mushroom Finder to observe and transmit data on mushrooms and the changes in the fungal world, thereby contributing to the research and learning new things.

The Mushroom Finder collects scientifically based fungus floristic and phenological data which is then taken over in the Austrian Mycological Society’s database. The aim is to comprehensively document the occurrence and distribution of the fungi in Austria and beyond, to present the data graphically and to evaluate it accordingly. On the basis of this data, associations between the occurrence of the fungus species and the temperature profile can be researched, which in turn can be used to analyze effects on climate change.