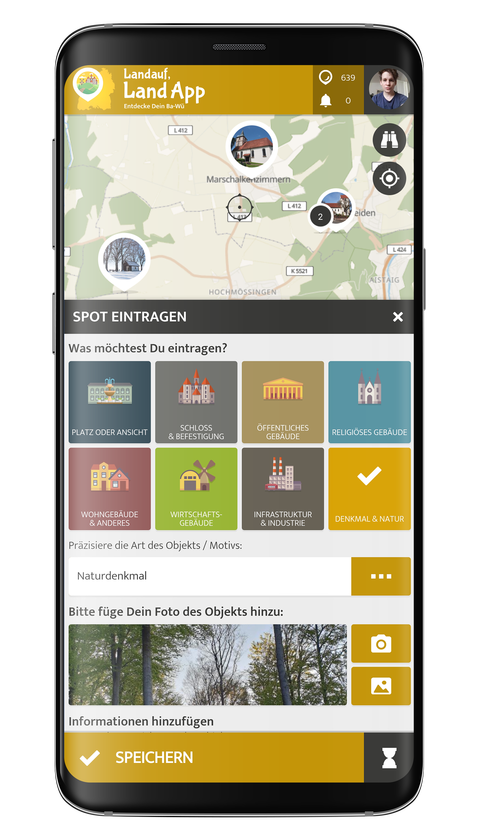 Landauf, LandApp BW is an interactive data collection project by LEO BW and the National Archive of Baden-Würtemberg in Germany, EU. The Citizen Science App is focused on contributions about landmarks and historical buildings in the area. The project is including local communities and gather their knowledge about their own regions.

The project "Landauf. LandApp - Discover your BaWü!" was launched after the idea for a participatory project had been around for some time since the regional studies portal LEO-BW was founded in the course of further development. Until then, the portal had only contained content from cultural and state institutions, but citizens had repeatedly sent in their photos of interesting places and sites, as well as information relevant to the state's history.

An Appropriate, contemporary and entertaining way to integrate this knowledge into the Landauf LandApp project was to develop an App.
A large part of the almost 1500 motifs uploaded by the users so far are, of course, the well-known sights, castles, etc. But also lesser-known places and local highlights, such as wayside crosses, boundary stones or the so-called "nose signs", find their way here and bear witness to an immense variety.

The development and use of an App for smartphones was an obvious choice for the project partners because of the mobile technology and the available photo opportunities. The localization function of smartphones is excellent for locating monuments on a map, for example, and SPOTTERON offers the ideal platform for this:

"The LandApp offers various social components in addition to the possibilities to upload, locate, categorize and describe photos. The posts can be liked, commented on and statistically processed. It was important to us that the interface is as intuitive as possible to use," says Daniel Fähle (project manager).

In addition, Landauf LandApp is very suitable for learning. It challenges users to deal more intensively with the culture and history of their surroundings by writing descriptions of their photos or exchanging information with other users or the Landesarchiv as the editorial team.

The user's contributions remain visible to everyone in the App, and each contribution completes the integrated cultural map of Baden-Württemberg. The recording system is also a research and presentation platform for those interested in regional studies. In addition, the user-generated content is successively transferred to the central state portal LEO-BW and linked with the entries of the state's cultural institutions, thus securing the data in the long term and making it permanently available to interested parties for subsequent use.