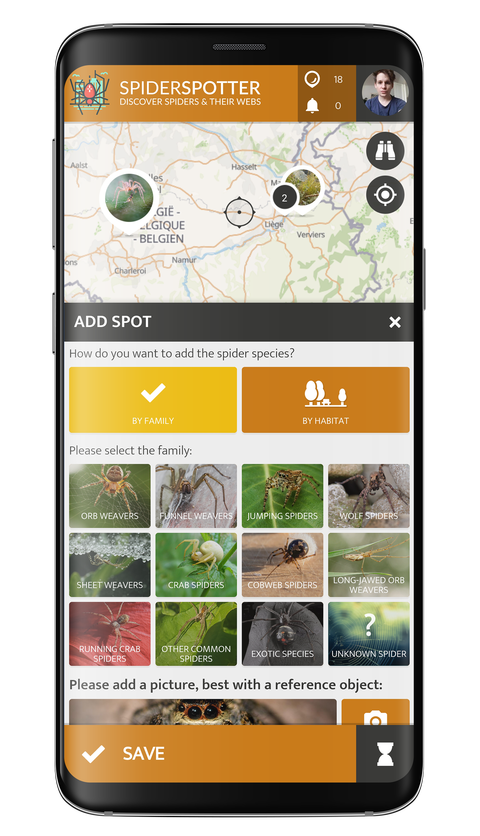 In the SpiderSpotter App, Citizen Scientists can share observations of spiders and their webs to help the research about their adaptation to the environment and contribute to biodiversity monitoring. The App features a range of spider species and it has an active community of spider enthusiasts and arachnologists.

The SpiderSpotter App was created in cooperation with the University of Ghent, and will be enjoyed by all spider lovers!

The increasingly hot summers of recent years are problematic, not just for us humans - especially in the cities. The concrete and the buildings heat up during the day, and radiate the heat back during the night, causing challenges for all living things. Of course, spiders are also looking for new ways and means to adapt to these new conditions. With the SpiderSpotter App, scientists are trying to figure out how these changes are going to happen.

A Community Science App to study Spiders, their Colours and Webs

Lighter cars heat up less than dark ones - that's a well-known fact. However, this also Applies to spiders! Scientists, therefore, expect spiders to adapt to the city's hotter temperatures by becoming brighter over time to prevent overheating.

As food sources are also more scarce in cities than in the countryside, scientists expect to see webs with a smaller mesh size that are more efficient in capturing prey.

Citizen Scientists are an essential part of the SPIN-CITY project. With the SpiderSpotter App, users can photograph the spiders, document their observations and enter all information, from the colour and size of the spider to the nature of their webs. The interactive map ensures that the data is accessible to anyone interested.

By studying spiders, their colours, and webs, scientists get not only valuable information on how animals adapt to climate change but also how fast climate change is progressing. Also, with a little bit of luck, they may provide us with some answers on how to better cool our cities in the future.