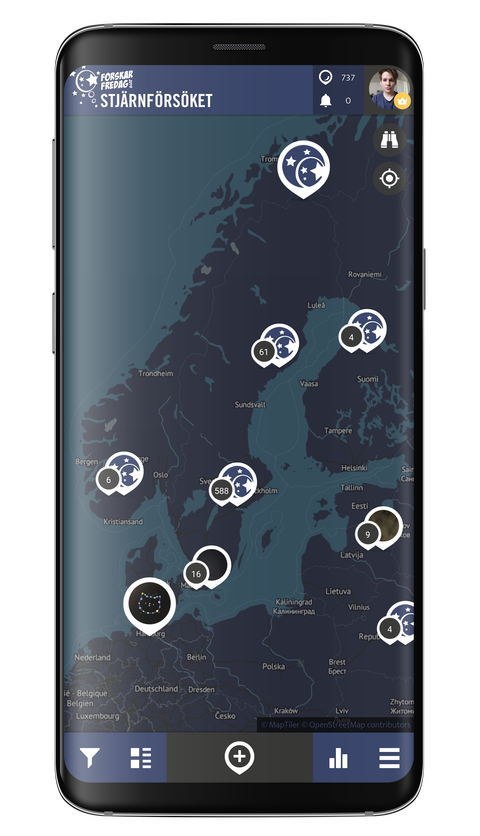 The "Stjärnförsöket" (Star-Spotting) project collects contributions about light pollution in Sweden and in partner countries. By pointing a cardboard tube in all cardinal directions, Citizen Scientists record how many stars they see at their current location. By these values, light pollution can be calculated directly in the Citizen Science app. The project is part of the "Forskar Fredag 2019" initiative, funded by the EU Horizon 2020 program.

In the "Stjärnförsöket" project, Citizen Scientists point a cardboard tube in all directions and count how many stars are visible to the bare eye. By that method, developed by researcher Urban Eriksson from the physics and astronomy department of Lund University in Sweden, it is possible to calculate the level of light pollution at the location and time. The project is part of the Horizon 2020 funded program "Forskar Fredag" and also part of the upcoming European Researcher's Night by the European Commission. The project is coordinated by the Swedish non-profit organisation Vetenskap & Allmänhet (Public & Science), VA.

Since smartphone displays have strong back-lighting for bright color display, the eye will adopt to that brightness when using a Citizen Science app at night for an observation in a dark environment. This can result in wrong observations, or at least will reduce the usability of such an app since a observer will have to wait a period of time until his or her eye is used to the dark surroundings again for making a new observation. To counteract this effect, we have designed a new feature on the SPOTTERON platform for Citizen Science apps, which as always is now ready to be used by all other projects on the platform without additional development costs: the new night mode.

The whole app is based on a dark color scheme, which offers black or dark gray backgrounds with fonts and interactive elements in brighter colors. In addition to the interface, we designed a new map layout on our map server infrastructure, which provides a dark map version for the app. With the new night mode, Citizen Science projects in the area of astronomy, nocturnal animal monitoring or other have an optimized interface present which can highly increase the effective use of the Citizen Science app in the field.

In addition, we invented an extended application of the built-in image editor, which has the possibility to add so called custom "stickers" to the picture of an observation. In all Citizen Science apps on the SPOTTERON platform, users can take a picture with their smartphone while adding the data of the spot. Since photographs at night have low detail, noise and are in general not very useful for identifying details or objects, we created a unique approach in Citizen Science to let the users have fun with their generated content and provide still photographs with variation for the spot previews in the app and e.g. social media sharing.

The image editor in Stjärnförsöket features a set of 36 cool sticker images, which can be placed in the photographs of the dark night sky in a way every smartphone app user is already familiar with from chat apps like Signal, WhatsApp or from social media platforms like Instagram or Facebook. These stickers greatly improve the uniqueness of the spots and add a new level of fun to participating in a Citizen Science project. Here are some creations from the test phase:

It is great to see an already existing feature being used creatively in another way, The "stickers" functionality has been contributed by the Citizen Science project "Crowdwater" by the University of Zurich, Switzerland for putting measurement scales in the pictures of streams and rivers to add a reference point system for ongoing water level observations. In Stjärnförsöket, the stickers are now used as a long-term motivation asset and to create visual diversity in the Citizen Science app.