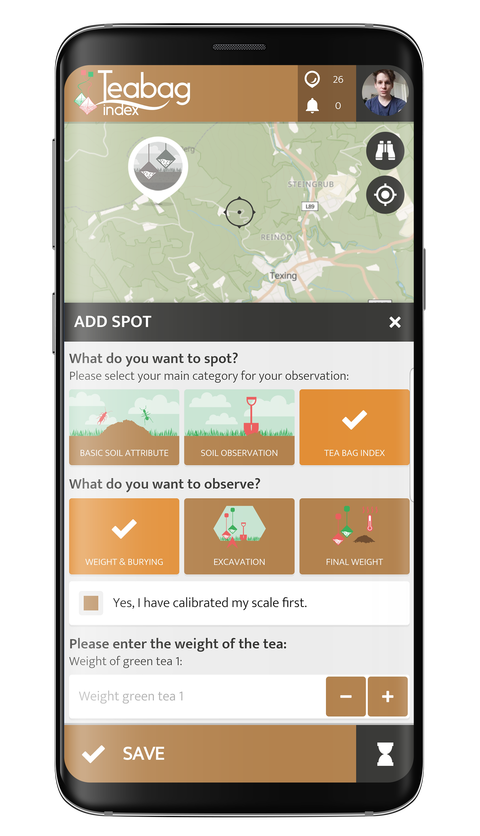 In the Tea Bag Index Citizen Science App, everything is about soil. Various observation categories are ready to participate in, from easy soil classification and testing to the well-known method of burying and weighting teabags to measure the decay rate of plants. Citizen Scientists are welcome to participate worldwide and contribute to improving climate models and soil research.

Drinking tea for the climate?

The Tea Bag Index (TBI) collects data on soil observations and in particular on the dynamics of soil decomposition. The degradation of organic matter in the soil is part of the global carbon cycle, which provides information about the biological activity of the soil and is therefore important for climate change. Changes in carbon content in soil can both exacerbate and mitigate climate change.

The idea is simple:

Citizen Scientists bury a tea bag (Lipton green tea or rooibos) and dig it out again about three months later. During this time, the tea leaves inside the teabag decompose and, depending on the grade of decomposition, provide us with information on what happens to the plant material in the soil.

This method was developed and successfully tested by a group of scientists from the Utrecht Univeristy, the Umeå University, the Netherlands Institute of Ecology, and the AGES - Austrian Agency for Health and Food Safety, so that the experiment is now carried out in many different schools around the world.

With this tested and established method, the decay rate of the plant material in the soil can be measured and climate models can be improved by that data.

The first tea bags were already buried in 2010. Since then, the initiators have developed and improved the method. The project was well-received by the media, was awarded several prizes, and went global in 2016.

In 2017, Lipton changed the material of its teabags from woven nylon to non-woven PET bags. Therefore a new version of the TeaBagIndex had to be started because the new material could affect the measurement data. Now it is possible to enter data from both types of bags, as long as they are specified exactly.

The Tea Bag Index is now part of several projects, including Teatime4schools, where students bury tea bags and examine the dynamics of soil degradation.
There are already 150 schools involved in this project throughout Austria, and with the SPOTTERON Tea Bag Index app, they have the perfect tool for this project.