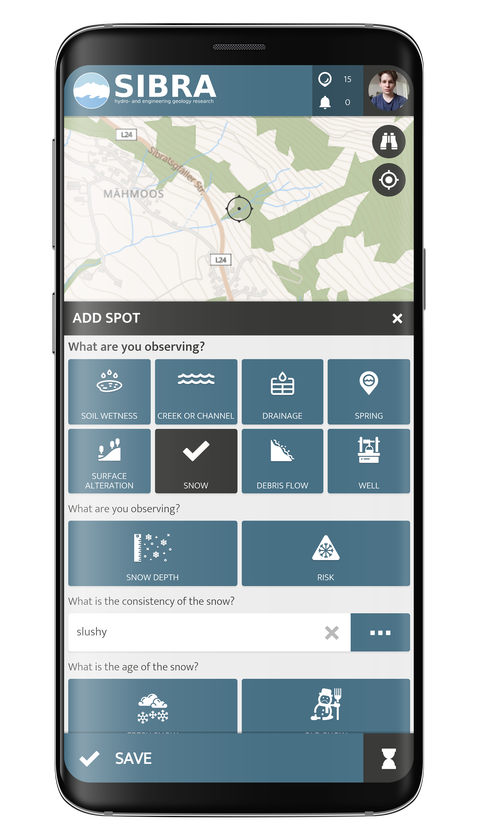 The connections between water and geological underground are diverse and often complex. Using the SIBRA App, citizens can generate reliable data on these topics and thus contribute to a better understanding of these connections. At the Geological Survey of Austria, the data is being combined with other methods of measurement and used, inter alia, in developing models and scenarios that allow for assessing possible effects of extreme weather events, such as heavy precipitation, rapid snowmelt, flooding or draught.

SIBRA stands for Systems-Integrating Bottom-up Research Application for Hydro- and Engineering Geology. And it also stands symbolic for the model region, in which the app was developed: together with committed citizens of Sibratsgfäll in the Austrian province Vorarlberg, a research project at the Geological Survey of Austria implemented an approach that involves those citizens, whose environment is in focus. Sibratsgfäll is located at the sunny side of a wide valley in the Vorderer Bregenzerwald region. The village is first and foremost shaped by agriculture and tourism. The population of the village has strongly been engaging with geological processes, since they had to cope with the aftermath of a massive landslide at Rindberg in 1999.

The SIBRA Citizen Science App provides a collectively developed measurement tool that supplements other existing methods in the areas of hydro- and engineering geology, expands data availability, and enables interested citizens to actively engage with processes like geological mass movements and hydrogeology.