All about the birds: Ornithology apps running on the SPOTTERON Citizen Science platform Humans and birds have a very long shared history. We have grown them for poultry, we appreciate their beauty, and in some cultures, we had even worshipped them as gods. We have been observing birds, their behaviour, their flight and migration patterns since prehistoric times, many cave drawings around the globe being proof. To this day, humans and birds have a close relationship. It is, therefore, no surprise that ornithology is also one of the oldest branches of Citizen Science. Ornithology, the "methodological study and consequent knowledge of birds with all that relates to them ", include many scientific fields such as ecology, evolution or behavioural science. On the SPOTTERON platform, you can currently find three projects based on the observation of birds and their behaviour.

The project run by the University of Sydney focuses on five bird species that seem to adjust to changing environments like cities by flexibly changing their behaviour. The Sulphur-crested Cockatoo, Australian Brush-turkey, Australian White Ibis, Little Corella, and Long-billed Corella have all been observed adapting to human-modified areas. Occasionally, they are considered a nuisance, yet these Australian native birds are doing their best to survive in human-altered landscapes.

The Big City Birds evolved from the pre-existing Brushturkey App to include more species and widen its scope. At SPOTTERON, we took on the challenge to completely redesign the App, create the new logo, and, of course, all the buttons inside the App, giving it a fresh and inviting look and feel and making a complex questionnaire as accessible to the users as possible.

With over 11 thousand Spots and counting, Big City Birds is the most successful ornithology project running on the SPOTTERON platform so far.

After selecting what kind of observation the user wants to make (a bird species, nest, or roost), users can continue the questionnaire on the birds' whereabouts and behaviour. There is even a name tag matching system in the App that will tell you the bird's name if you enter the colour and tag number of a tagged bird.

The collected data will help scientists understand these species' behaviour, movement, reproduction, distribution, and habitat use in suburban areas. The scientists behind the project aim to use this information to help understand the behavioural traits that have allowed some species to adapt to the challenges and opportunities of city living.

Here you can find more info and download links for the Big City Birds App. 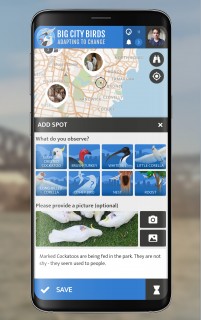 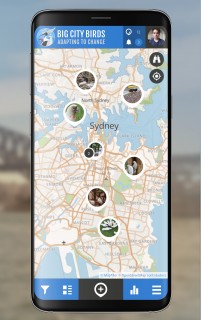 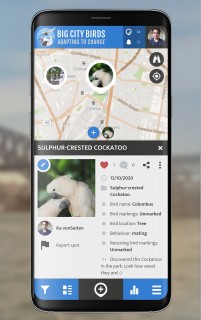 Kramobil - Crows in the Zoo

KraMobil (Crows in the Zoo) is a Citizen Science Project of the Department for Behavioral and Cognitive Biology of the University of Vienna in cooperation with the Konrad Lorenz Research Station and the Zoo Vienna to observe crows and their behaviour. The aim is to actively involve zoo visitors and citizen scientists in the research activities of the University of Vienna (Department of Behavioural and Cognitive Biology together with the Konrad Lorenz Research Center) to monitor different crow species and individual crows' behaviour in the zoo using the Citizen Science App.

You can observe four main European crow species with the KraMobil App, the carrion crow, hooded crow, hybrid (Carrion/Hooded) crow, and the rook. After selecting a species, you can also add other corvid species to your observation, such as jackdaws, magpies, Eurasian jays, or others. The questionnaire continues with the whereabouts and, optionally, the birds' behaviour.

These observations shall allow scientists to understand better the ecological factors determining their group dynamics and will also provide insights into the influence of ecological factors (e.g. food availability or presence of zoo animals) on their social behaviour.

Here you can find more info and download links to the Kramobil Citizen Science App. 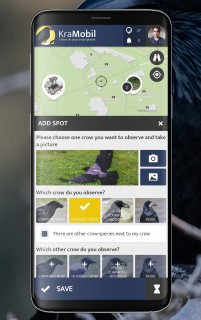 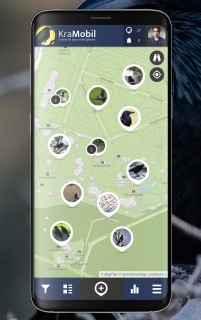 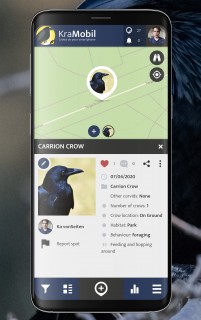 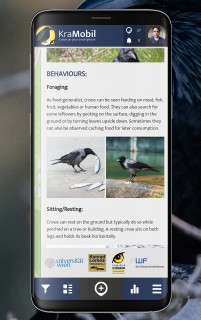 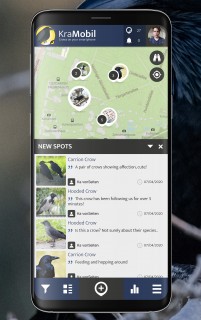 The project aims to monitor the time-space patterns of three avian species (greylag geese, ravens and northern bald ibises), which are considered models. Because of their availability and accessibility in the study area (Cumberland Wildpark, Grünau im Almtal, Upper Austria) and the public's interest, they are perfectly suitable for the project. Birds are individually marked, allowing citizen scientists to recognize the single animals in the field.

The greylag geese and the northern bald ibises are marked with colourful rings on their legs, whereas the ravens are recognizable by different wing tags.

The Citizen Science Project aims to investigate when and where exactly which animals are to be found: do they have preferences for particular places of the park, or do they prefer the company of other conspecifics? 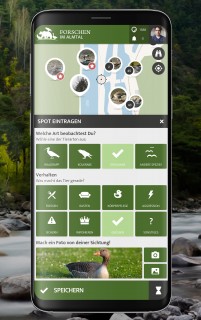 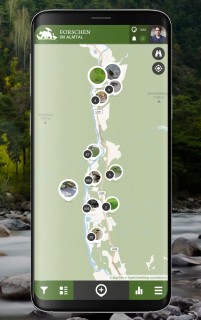 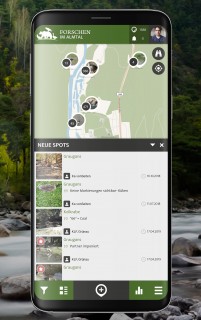 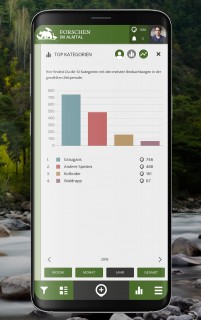 A place to house all Austrian ornithology projects is birdscience.net. The initiator of this platform is the Konrad Lorenz Research Station for Behaviour and Cognition, a Core Facility of the University of Vienna (Grünau im Almtal, Austria) and built together with SPOTTERON. Their main research models are greylag geese, northern bald ibises and common ravens. The birds are free-flying and individually marked with coloured leg rings or wing tags. They are interested in the mechanisms of social life.

At the moment, there are three different possible ways to join the research. One research question is which behavioural patterns influence the breeding success of the model organisms. Via NestCams, participants can participate worldwide by coding the videos from the nests of greylag geese and northern bald ibises. Video monitoring of nests is part of a broader project into the breeding performance of two avian model species, the greylag goose that forms long-term monogamous pairs and the northern bald ibis that is seasonally monogamous.

The app "Forschen im Almtal" is locally restricted to the Cumberland Game Park in Grünau and enables behavioural observations and sightings of the individually marked birds. Last but not least, Citizen Scientists can help investigate the ecological aspects of habitat selection in the northern bald ibis, an endangered avian species, by spotting sightings of this bird and collecting ecological characteristics of the visited areas. The App WaldrApp can be used anywhere you see an individual in the wild, especially in Upper Austria, in the area around Grünau im Almtal and Molln.

Are you a scientist in the field of ornithology and behavioural science wanting to include the power of Citizen Science into your project? We might just have the right tools for you!

A Milestone for Citizen Science: SPOTTERON 3.0 is here!

Offline Maps and Spots for Citizen Science on Field Trips