The Austrian Central Station for Meteorology and Geo-Dynamics (ZAMG) Austria has funded the extension. They now already run their second project on SPOTTERON after the successful phenology app "Nature's Calendar": QuakeWatch Austria.
The ZAMG's geodynamics division maintains the governmental earthquake measurement infrastructure of Austria and processes live data from quake sensors all over the country. In the upcoming QuakeWatch app, data about occurring earthquakes will be now additionally collected by the public.

To display occurring earthquakes in the app of the project, we have developed a new custom extension. Earthquakes are "events", which take place at a distinct location and at a particular timeframe. To reflect that visually, we have created a new overlay, which displays current events in circular shapes. The width and colour of a circle are calculated in real-time by the magnitude and depth of an earthquake. By connecting via a custom API, we display the earthquake data in real-time in the app. 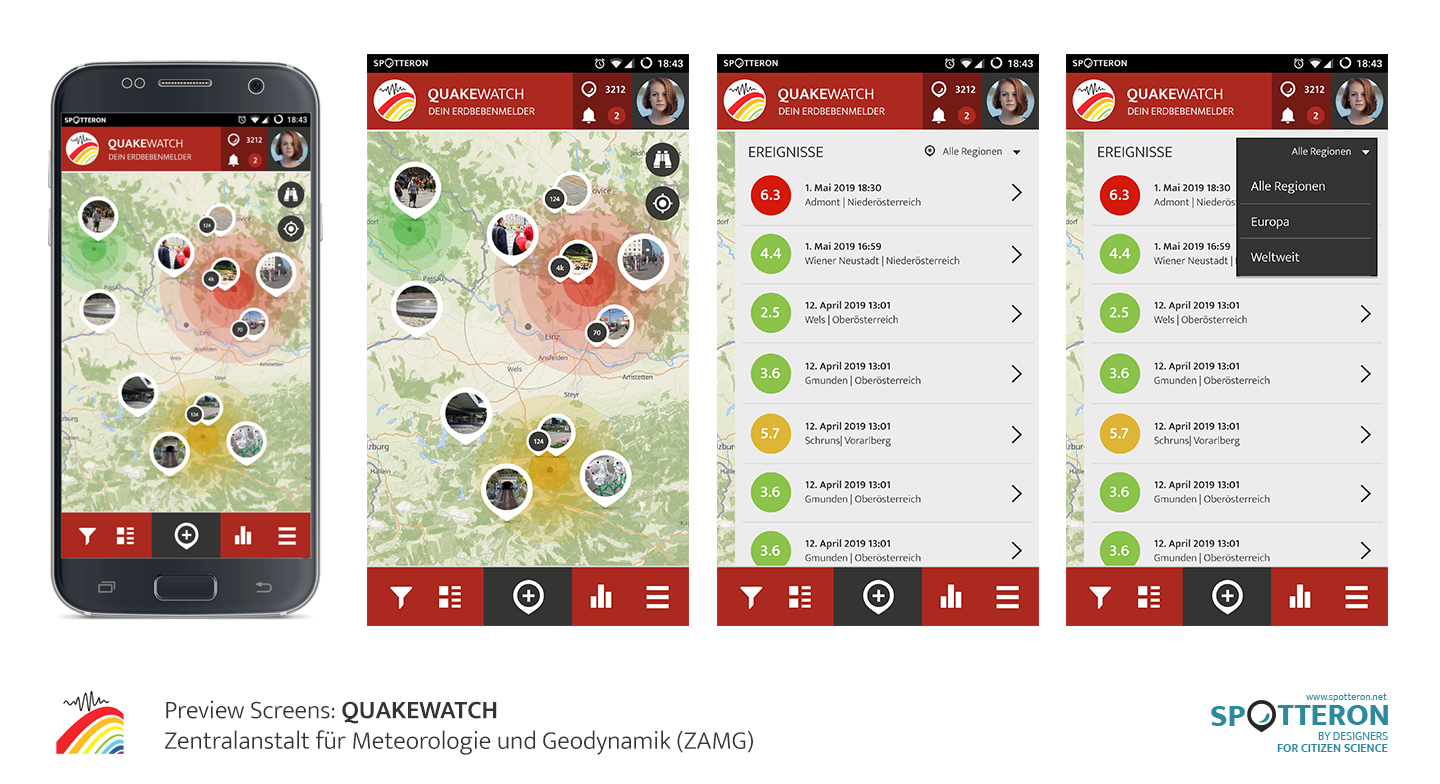 Designing it openly: Events for every Citizen Science app

Since not many Citizen Science projects have similar real-time data available, we have taken the whole concept a big step further. New features should always be of use for all other projects on SPOTTERON, too. That's why we have created a new section in the SPOTTERON administration interface, in which events can be created manually. By setting up a location and some additional information, scientists can create a new event with just some clicks. More options like a cover image and an end date are available.

But events are not only happening in an area on the map - often they are on just one location, like for example a workshop, a talk on a conference or simply a community meet-up. For these event types, we have created a second option: if an event has no given radius, it is displayed as a point event. The point events have their own distinct marker style.

Every event can be opened in the app with just a touch and displays all the information of an event. From the date and time to a description, which can also include links to other homepages, all event Infos are displayed in a new panel. Furthermore, radius events have a button, which shows "Filter spots by this event". By pressing the button, a filter is applied to the map view. Just the spots, which are in the radius of the event, are then displayed on the app's map view. To make this work, we have completely reworked the current filter system and extended it by new indicators that filters are active.

In the main menu, a new item provides access to the list of all current events in one project. This list view is chronologically sorted and also shows the current events cover images as icons. In a second panel called the event archive, all past events can be accessed.