As a project partner on the SPOTTERON platform, you can now gently guide the Citizen Scientists contributing to your project to make better, more accurate observations in the Apps, thus making the data you're trying to obtain better and easier to manage.

You might already be familiar with the Spot-Update feature, which allows participants in your Citizen Science project to make observations of a specific plant, landscape, etc., and create timelines over extended periods to gather valuable data during its course. The data of ongoing contributions in the Citizen Science App are linked in reference to each other by submitting them as spot updates in the Citizen Science App. This feature can be used for chronological observations and record developments and changes on a location.
Read all about the "Spot Timelines" feature here on our Blog.
While this timeline feature has been on the SPOTTERON platform for quite some time, not all users have been aware of the advantages of posting a Spot update rather than a new spot, especially when a Citizen Science App has been just launched.

To foster ongoing observations on a single data point, together with the international CostSnap project, we've developed the Nearby Spot feature, a brilliant little helper within the App that scans the user's surroundings for any already existing Spots that might need updating.
These Spots can be either your own or those of other users, such as a particular tree in a park that many people pass every single day. Instead of hundreds of people creating a new spot of the same tree, people can add their observations to the existing one, with the apparent advantages.

Adding a Spot Update with the Nearby-Spots feature is easy as pie.

When you click on the plus button to add a new observation, instead of the usual add-spot-dialogue, a new window pops up. It shows you all the existing Spots within a certain radius with a Citizen Science project. 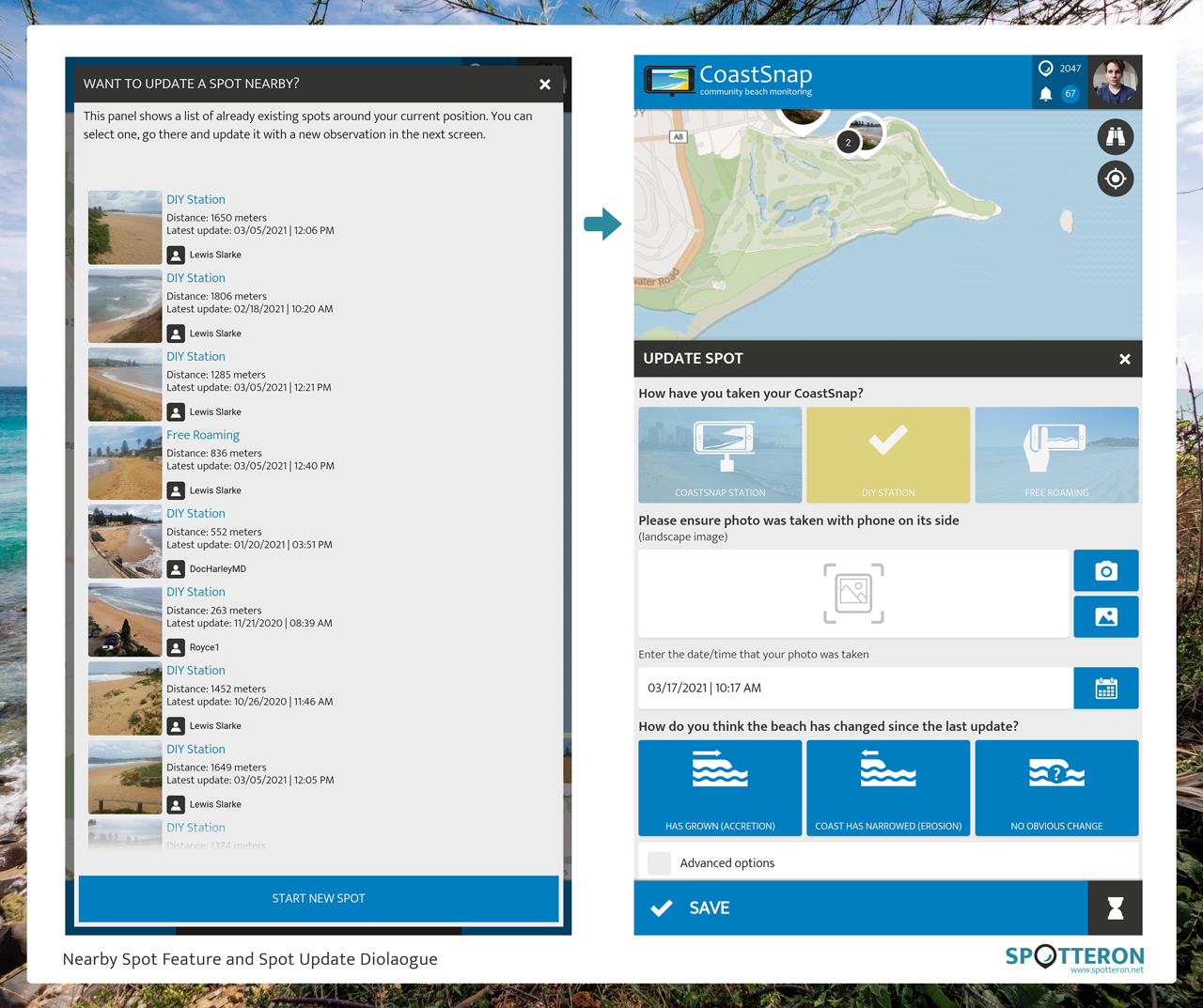 Example from the CoastSnap Citizen Science App: a list of Nearby Spots suggested for updates. After choosing a spot to update, the Update Dialogue pops up.

This radius can be defined individually for every project. Still, we recommend it to be about two kilometers, as it balances out any inaccuracies regarding location service and GPS that might occur on a mobile device. It's also a realistic walking distance a citizen scientist might want to walk at a leisurely pace within less than half an hour - something we at SPOTTERON warmly recommend doing anyway, especially in the current times of lockdowns and travel restrictions.

Since a spot update is connected with the original spot, adding updates rather than new Spots helps obtain a neat set of linked data. Within the Citizen Science App itself, users can swipe between the chronological Spot Updates and discover how a place, species, or object develops over time. 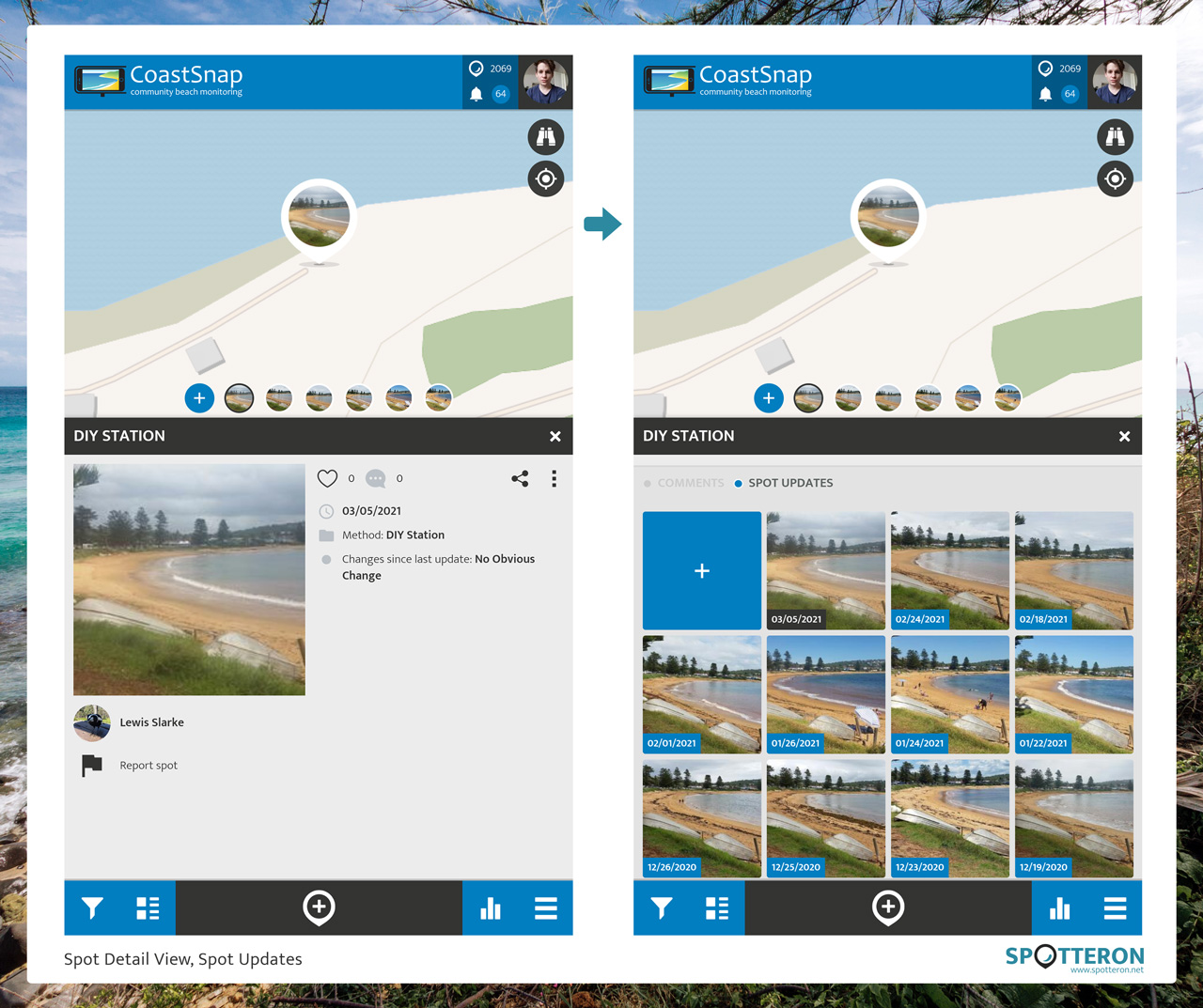 Example from the CoastSnap Citizen Science App: Spot Detail View of the latest Spot, and Timeline of all the Spot Updates.

Finally, it is a truly gratifying experience for the citizen scientist to have your Spots updated by others in the Community! Working together is an essential trait in Citizen Science, not only between projects on the collaborative SPOTTERON platform but also between Citizen Scientists in your App.

This newly developed feature is part of our unique "Feature Ecosystem" and is available for all projects running on the SPOTTERON platform. As always, it can be utilized by existing and new projects without any extra development costs and works right from the start of a fresh App.

Offline Maps and Spots for Citizen Science on Field Trips