Blocking Content in Citizen Science Apps on the SPOTTERON platform Publishing Smartphone Apps on the App Stores for Android and IOS comes with necessities within the set of rules defined by Apple and Google. All Apps on the platforms must accept the terms of services and given rules to be able to have a presence on the App Stores. Sometimes this also comes with surprising challenges, as we have experienced a short while ago.

Part of Apple's Guidelines for User Generated Content is the necessity to have a content blocking feature present, allowing users to hide contributions by others in all Apps. Without such features, it is impossible to update existing Apps on Apple's App Store with new versions, bug fixes or changes to the App itself, nor can a new App be published.

It is part of our service on the SPOTTERON platform to ensure the Citizen Science Apps run properly. To guarantee the continuity and stability of the projects' digital tools on Apple's ecosystem, we have developed the new content-blocking feature without extra costs for the project partners.

The new blocking feature permits participants in a Citizen Science App to hide content like Spots or Comments, and there must also be some functionality in place to block other users they might not wish to engage with.

Content Management for Users of a Citizen Science App

A logged-in user in a Citizen Science App on SPOTTERON can now hide content by simply using the new interface elements. They can choose to either "Block content", which blurs out only one particular contribution or block another user completely, resulting in every contribution by that user being blurred out. The process can be reversed anytime by clicking "Unblock content" in that Spot. 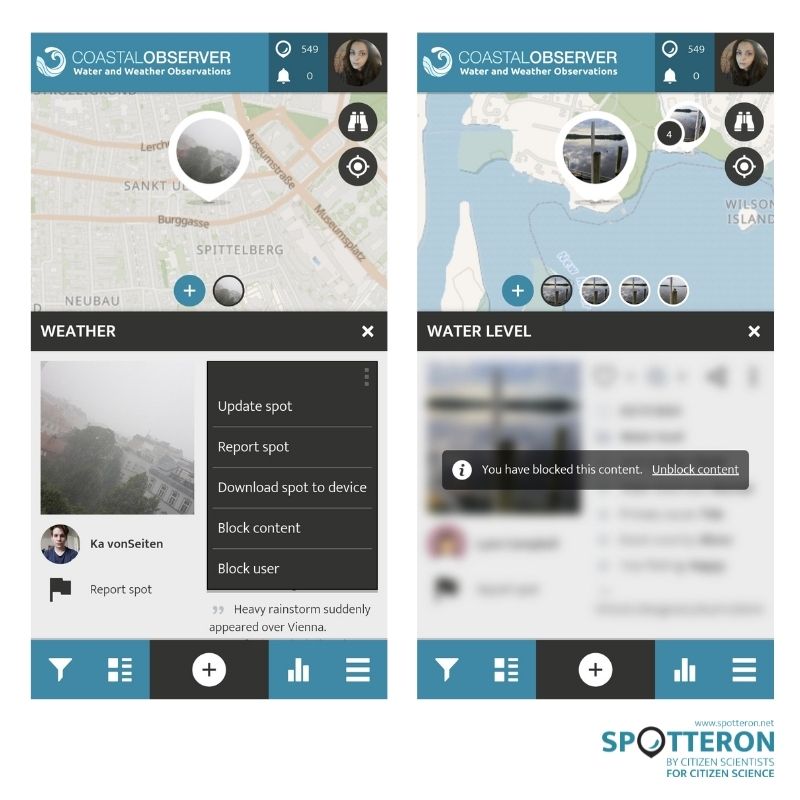 Screenshots of the User Blocking Feature in the Coastal Observer Citizen Science App.

In addition, we have walked the extra mile to also implement a "report comment" feature for user-to-user communication. This lets users flag comments by others, which they find intrusive or spammy. The management team of a Citizen Science project will get notified about such flags in the Data Administration Interface in the community management section. From there, they can take further steps on their own decision if a reported comment should be disabled or removed.

As a platform feature, this new functionality is now already included in every future App on SPOTTERON right from the start. With this feature present, a new Citizen Science project on the platform does not have to care about being able to fulfil Apple's guidelines on User Generated Content. For existing apps, the feature will be rolled out with upcoming App updates.

Does Data Validation improve with the community's help in Citizen Science Apps?