On Saturday last week, I was on a walk outside to get a little bit of sunshine. But since Citizen Science became a significant thing in my life, these rounds are not only for stretching my legs. With the smartphone in my pocket and a bunch of Citizen Science Apps installed, every walk feels like an adventure.

Last Saturday I chose to visit the nearby park. Even in times of the Coronavirus Crisis, many people enjoyed a little bit of fresh air in socially well-partitioned groups. An urban park is a great place to explore and discover. I updated some of my phenology spots in "Nature's Calendar" to help to understand the impact of climate change on our environment.

But to be honest, a key motivation in uploading new observations is also to show my findings to the community and my friends. Participating in Citizen Science is always a social experience, too, and with the community features in the apps, I can easily interact with others.
Something just flew by. It seems to me that by my activity in Citizen Science projects over the years, my senses have become more trained in spotting small movements and points of interest. I jumped up and followed.

With the new "Spot-a-Bee" App, Citizen Scientists can record bee observations to create better knowledge about what kind of plants are helpful to bee populations and biodiversity in mainly urban areas. The passing insect was indeed a bee, a huge violet carpenter bee, covered in pollen and always in motion. It must have looked a little strange to the people in the park watching me quickly moving from one flower plant to another just to trying to photograph something that flies to the next source of pollen after a second. I can't think of a better sport.

In an urban artifical wetland basin

In this particular park, there is a water basin with Yellow Iris (Iris pseudacorus), which I observe for years now. Usually, it is a hub of biodiversity, but because of the ongoing drought in Europe, it is currently more a wetland or swamp. In normal weather conditions, it is teeming with life - from tiny crustaceans to larvae of dragonflies and water beetles. But now just honeybees drink water from the still moist ground. And there have been some tiny mushrooms.

I am no mycology expert, but whenever I stumble upon a mushroom, I record the observation in the Citizen Science App of "Pilzfinder" by the Mycology Society of Austria and the University of Vienna. By my participation in the Citizen Science project, I have also learned to identify different mushroom species I have never heard of before. I also learned about what mushrooms are contributing to our daily lives by being an essential part of the carbon cycle and by interconnecting with trees and plants. Without fungi, there is nothing.

A Citizen Science app for mycology 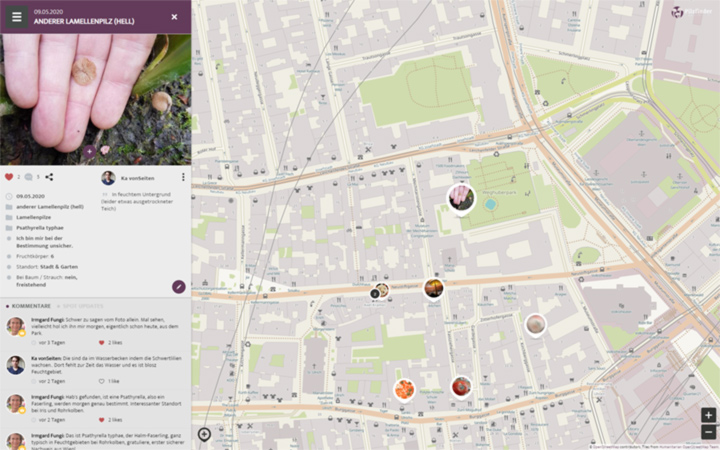 The project has no official smartphone apps (yet;), it is running as a SPOTTERON Package L with an interactive web-application as its primary tool for data input and community interaction. But as a designer of the platform, I enjoy access to test builds, and for Pilzfinder, there is one installed on my device.

I took my photographs - the project has taught me that when recording mushrooms for Citizen Science, you should always show the top and the bottom side of fungi to capture also its gills.
I have never expected it to be something important.

One beautiful thing about "Pilzfinder" project is that the mycologists and fungi experts give direct feedback on your observations and help with species classification. I was a little surprised that Irmgard Greilhuber, lead scientist of the project, commented on my spot that "she will drop by and collect some samples of the mushroom". Okay, just a regular day in mycology. 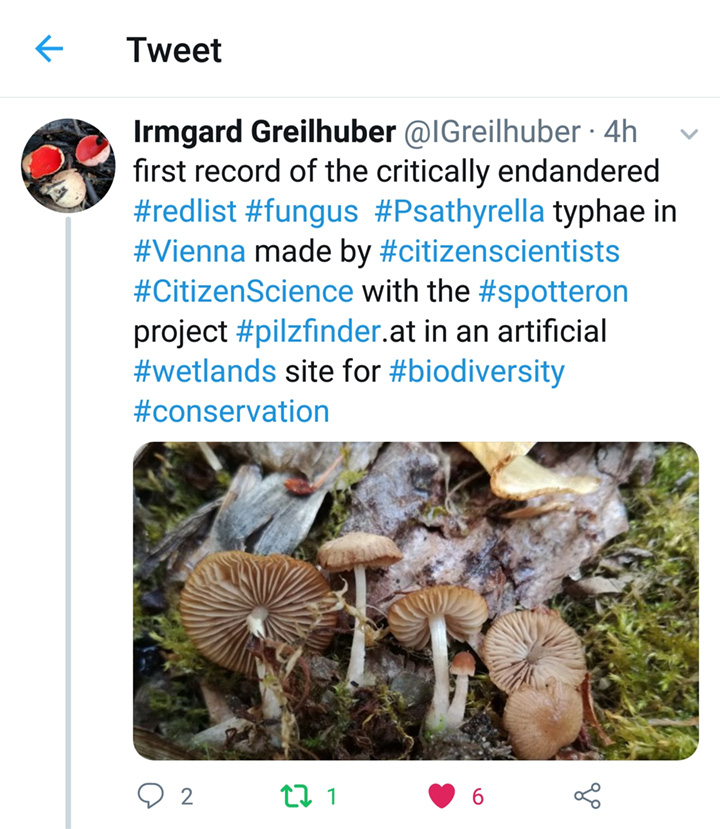 The species of the find in the half-dried basin is "Psathyrella typhae" -  a red-listed endangered species, and my observation is the first confirmed record in Vienna, Austria! How amazing! Here are some pictures of this small, but beautiful mushroom in the artificial wetland basin in the "Weghuber Park" in Vienna, Austria.

For size reference, I use the DIY print-out card from the SpiderSpotter Citizen Science project, which I, as a spider enthusiast, carry with me all the time glued on top of my ATM card case. You can download and print your own at www.spiderspotter.com! All the photos have been shot with my smartphone. Modern devices have quite amazing cameras and you can take great close-ups with them:

In the moment of the news I had to double-check, read the tweet twice, and my heart pounded with enjoyment. What a fantastic moment, participating in a Citizen Science App is fulfilling enough, but making a new important finding is something extraordinary. I shared the tweet with my friends and the team immediately. It puts a smile on your face. It makes your day, and it gives you the feeling to have done something, that really matters. At least for me personally, by participating in Citizen Science Apps, I feel not only to be part of a community of people sharing the same interest. I feel like my participation is also part of something bigger: a collective urge to understand the world better and to help to protect it in times of biodiversity decline.

You can see my "Psathyrella typhae" Citizen Science observation here in the Pilzfinder Web-Application with just one click: https://www.spotteron.com/pilzfinder/spots/216424 - check it out and join up if you are interested in fungi! It is easy to register your account, which works as login in all Citizen Science apps on the SPOTTERON Platform. With the community features, we can follow each other and explore the world together. Let's connect in the app.
Philipp | SPOTTERON

More in this category:
« CoronaReport App - A Citizen Science app in times of a global crisis