"The Science of Citizen Science" Book has been published!

Starting the new year with some good news: The new open-action book, "The Science of Citizen science "has been finally published by Springer and is now availableas a free book (Open Access) for download.
With over a hundred contributing authors from 24 countries, including us, the book is a culmination of the work of the COST (Cooperation in Science and Technology in Europe) Action, "Citizen Science to promote creativity, scientific literacy, and innovation throughout Europe ", COST Action CA15212.

About the new Open Access book on Citizen Science

The book has three sections. The first, introductory one, deals with more general aspects of citizen science: it's definition, different perspective of its actors (researchers and funders), various approaches in other countries, but also what contribution Citizen Science can make in the natural, cultural and social sciences and what the framework conditions for this are.
The second section deals with the social implications and the design of the cooperation between professional researchers and voluntary ones, and how it can increase inclusion and diversity through factors such as civil society organisations and politics.
The third section offers practical instruments to implement Citizen Science in projects and make the best use of it.

"This book is a wonderful conclusion of four years of intensive exchange within a European research network on citizen science," says Dr Katrin Vohland, Director General of the Natural History Museum Vienna and first editor of the book. "At the same time, it signals a beginning, as its curriculum-like structure allows universities and others to reflect on both the substantive contributions to research and the societal added value of citizen science. It also offers practical support for implementing projects and addresses emerging topics such as citizen science and artificial intelligence."- we couldn't agree more!

The whole book is released under an Open Access license and if available as an e-book download for free. 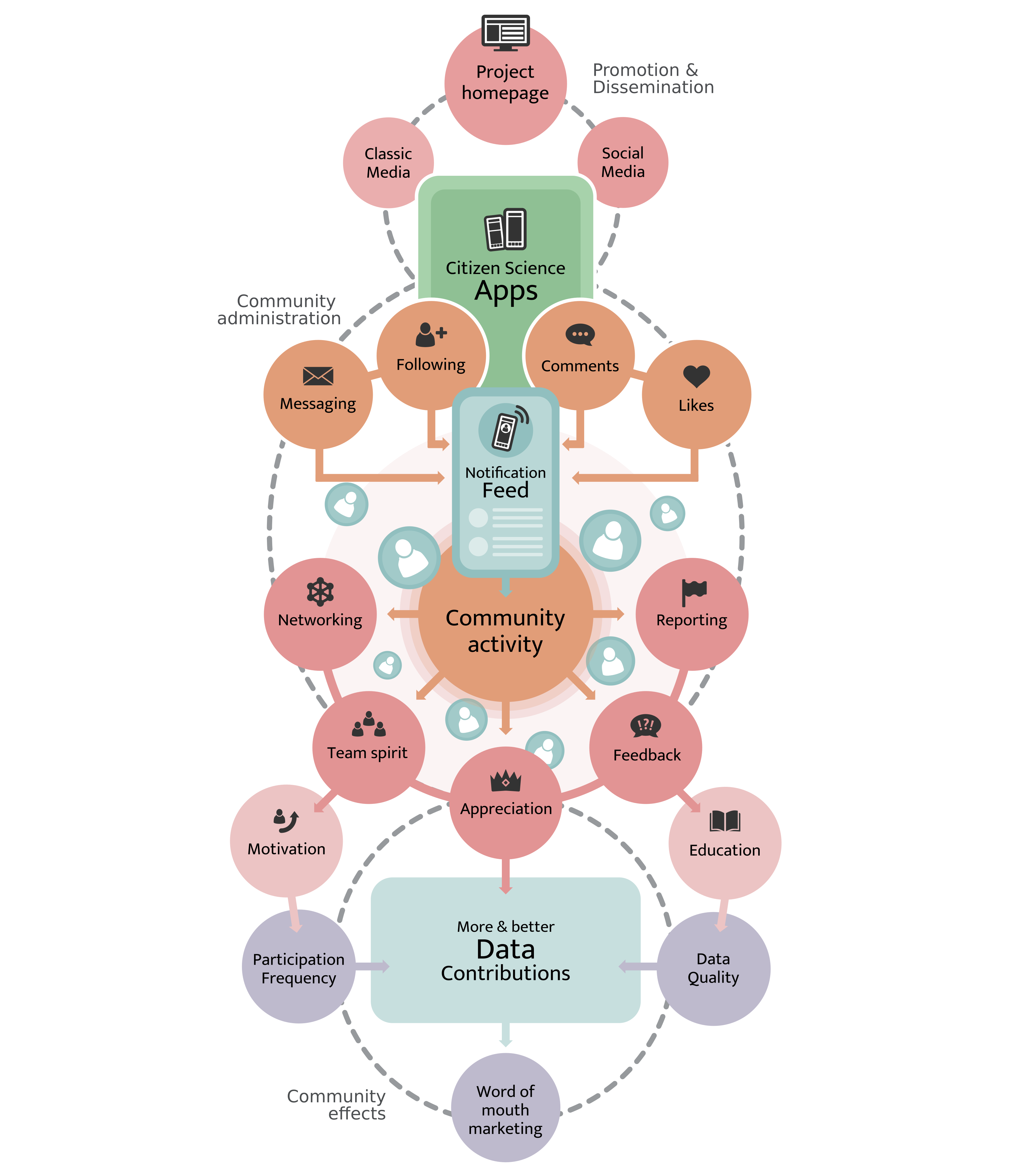 For sure, to tap into what a living online community can bring to a Citizen Science project, the necessary functionalities and features need to be present. Thanks to the development of the SPOTTERON Communtiy Package, which is included into every Citizen Science App on the SPOTTEORN platform without extra development costs, such features are part of every project's app already from the start. Modern digital communities are centred around an Activity Newsfeed, displaying personalised chronological updates to every user. These updates can include new contributions by friends, new comments or replies, messages by the project and much more. You can see this principle live in apps like LitterBug, CrowdWater, Nature's Calendar, or SpiderSpotter. 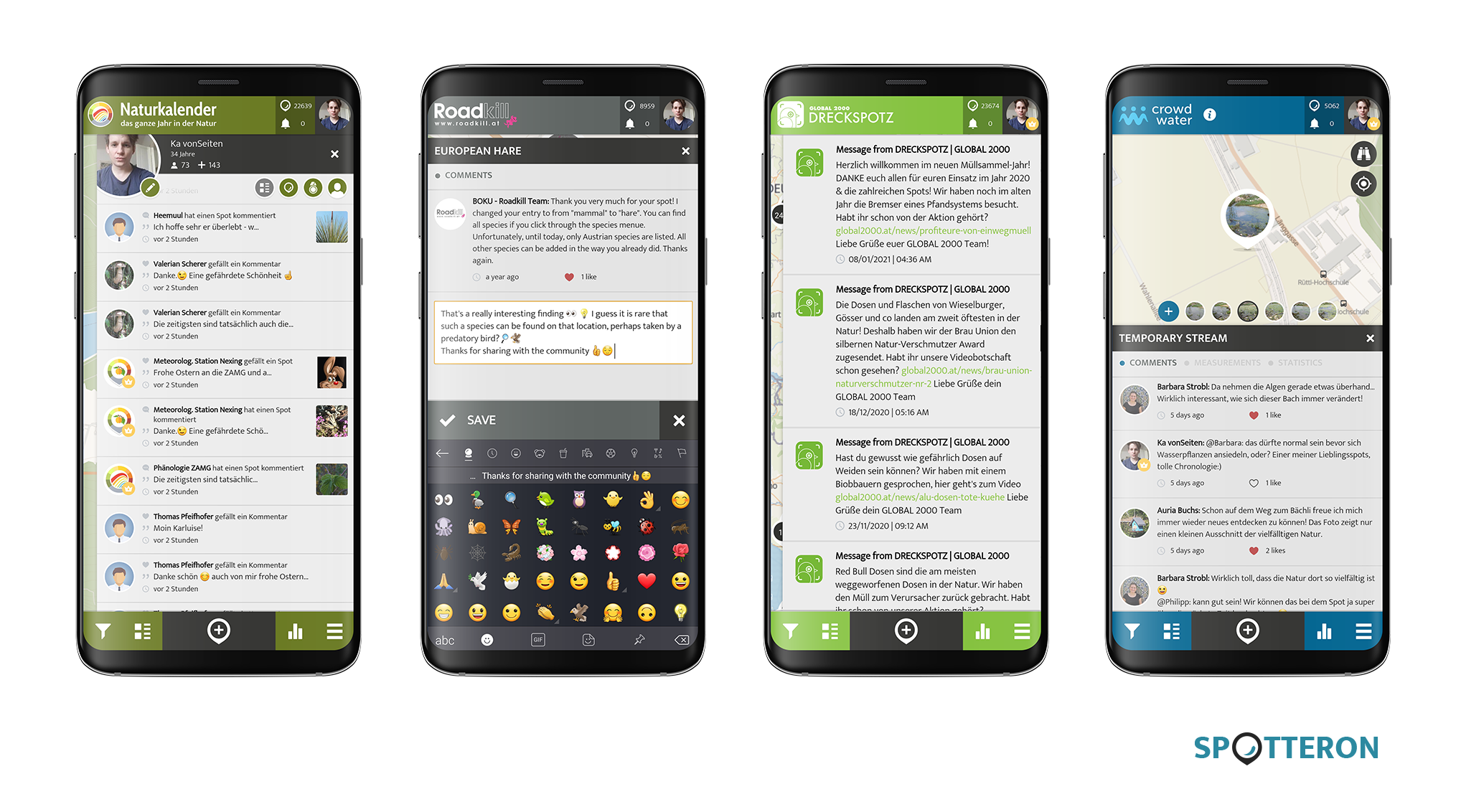 In addition to the community-based parts of a Citizen Science project, it is also essential how the underlying system is set up and what technologies the app is built on. We contributed the technical background on how a Citizen Science App environment looks like and on what technologies a project's toolkit is based on. Designing and developing Citizen Science Apps is a complex process and for establishing the toolkit for a well-working user community in an app, many features and functionalities must work together.

That's why the platform co-working approach of SPOTTERON, sharing these functionalities among the project and lowering development costs for single apps, is also reflected in the "The Science of Citizen Science" in the chapter Citizen Science in the Digital World of Apps. We are very proud that the following projects, running in the SPOTTERON Citizen Science platform, have been included as examples and references in the book:

It is wonderful to see our work in Citizen Science having such a great impact, and we are proud and happy to be part of the co-authors' team.
Thank you so much for this inspiring opportunity!

Citizen Science in Figures (made beautiful)

We had the honour to design all the illustrations and the book's front cover, giving it a coherent, fresh and modern look and feel throughout.
The process involved drafting a colour scheme and testing it for print, followed by custom designing all the icons. These, like the book itself, have been released under CC: by 4.0 and can be used by every institution, CIitzen Science initiative or project in presentations, publications and papers freely with a citation of authorship (CC:BY)

The design of the book's figures: from sketches to graphics

The first step in the designing process was to create a colour palette used throughout the whole book. We then ran through some tests such as printing in black and white to see if readability stays consistent. We made sure that the look and feel are coherent, fresh and modern and designed the graphics to convey their messages adequately. Since the illustrations consist mostly of charts and figures, we made sure that the colours are pleasant to the eye and can emphasise important bits by colour strength. We custom-designed all the icons and released the icon-set under the CC BY: 4.0 licence to be used by other Citizen Science projects.
From the first sketch to the finished graphics, we collaborated closely with the authors and editors to create the best possible result.

We also created a figure index for organisation and to have an overview, to track the design process and to have an established procedure for feedback and corrections.

The Figures in "The Science of Citizen Science" - Examples

The book's cover and its design variants

The cover of a book is the first what a reader sees. In collaboration, we have drafted ideas for the cover and its aesthetics.

Everyone knows Post-its. They are practical, everyday objects that make our lives easier and on which we give expression and structure to our ideas and thoughts through notes. When designing the cover, we used this symbolism to refer to the immediate presence of science in our everyday lives and to literally invite the viewer to take a closer look through the magnifying glass on the topic of Citizen Science in all it's diversity, which should embody the respective scientific disciplines through custom-designed icons. 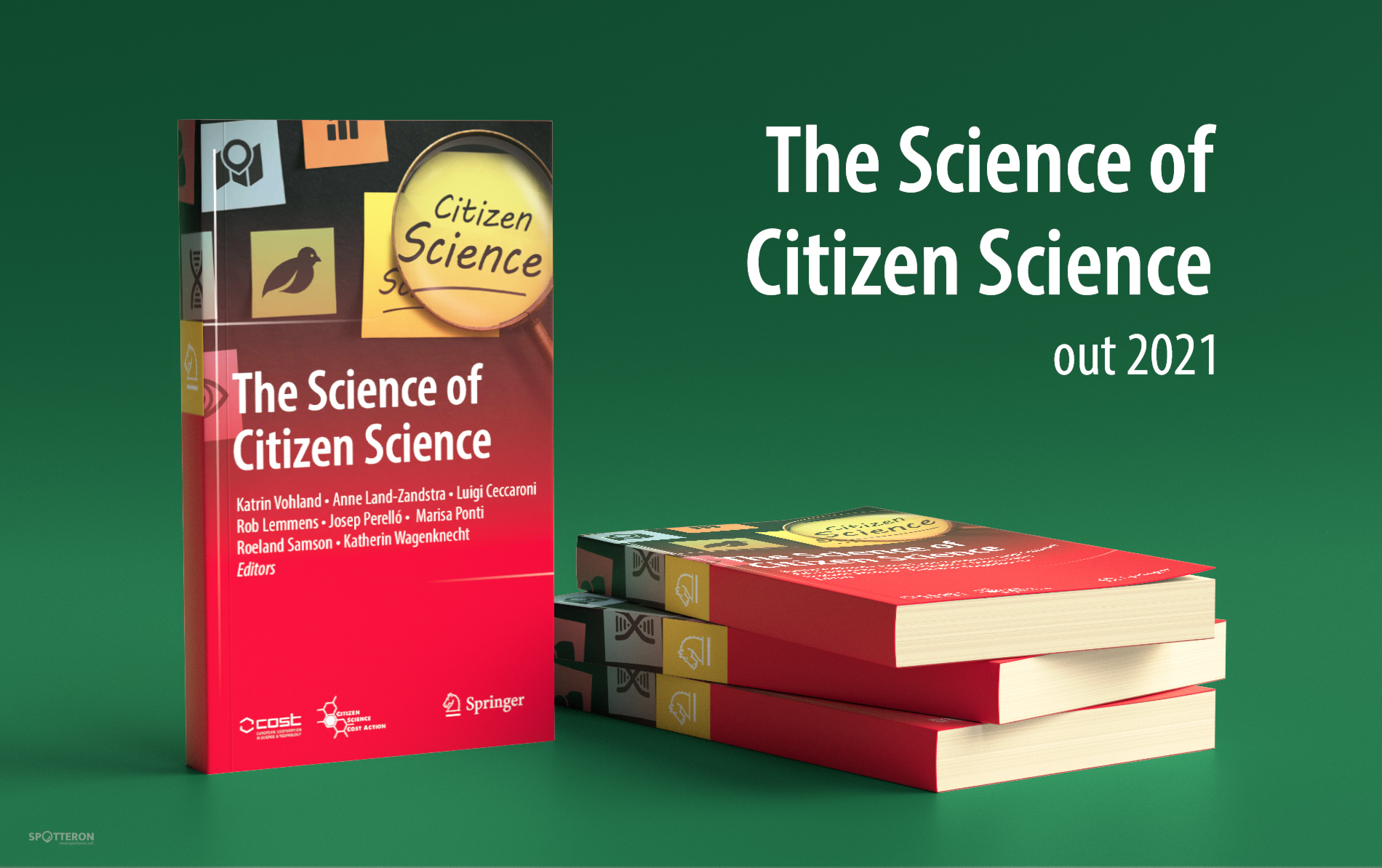 We have designed a cover variant as a suggestion (which you can see in the book's mockup above), which came out a little different in the end - but it is still great to see the post-it artwork coming to life.

It has been a fantastic experience collaborating on the book "The Science of Citizen Science" as a co-author and designing figures, icons and cover. Thanks to everyone involved and for the opportunity to be part of this journey.

If you are interested in Citizen Science and how stakeholders, actors and researchers from all across Europe work together to further develop the methodology in natural sciences, social sciences for collecting data and engaging the public download the free ebook on Springer publisher's website and learn more!

More in this category:
« Happy Holidays 2020 and thank you for all the Citizen Science!